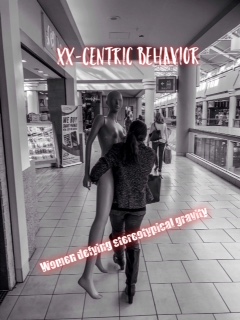 In early 2019, Laurie Towers decided to expand upon the interviews with trailblazing women she’d been conducting on the podcast “She’s Raising the Bar”. The idea was to create a more lasting document in recognition of the pioneers, the agents of change within literature, drama, fitness, music, film, dance and business. The document, currently in progress and in concert with photographer Elite Ziegelman, is  XX-CENTRIC BEHAVIOR: WOMEN DEFYING STEREOTYPICAL GRAVITY.

Considering the many angles and layers, the trappings of women’s oppression, would be such a task as to cut deeply into one’s 8-12 hour work day…The magnitude would create its own category such as “c) all of the above” , or relinquishing its potency to “d) other”.
A show I’ve had on the air for close to eight years now, She’s Raising The Bar, has been doing the roadwork. We tackle topics of ageism, sexism, racism, and any other “ism” that will now, or eventually, apply to us . On the show we’ve presented celebrated authors, filmmakers, and celebrities who’ve have been overlooked due to gender or age or both. The book project with the working title  XX-Centric Behavior creates the same dynamic in text form. Stories all that need to be told. Stories of the women who have “defied stereotypical gravity”, often by simply thinking as a human and not as a gender . Crazy and radical thoughts, yes? Women who were once possibly  immune to the casting couch of Hollywood but could not outrun the shelf life of their sexual potency and finding themselves out of work when they passed a certain milestone in years. Women who were discriminated in a sport that was dominated by men, traveling through the service roads until they could effectively merge into the flow of traffic.
Our mantra “Reinvention Is The New Revolution” has never been needed more than now as these leading women give support and hope through shared stories of adversity and conquest. Sadly, conquest sometimes doesn’t come in the desired form, yet we’re often forced to accept it. Until we make the change we want to see…Onward and upward. There are miles to go before we sleep …”